The new Tata Cha outlet is located on the lower ground level of Phoenix Market City Mall in Bangalore. 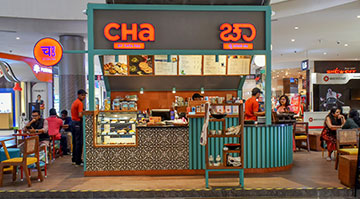 After having launched five cafes in the city, Tata Cha has opened its sixth outlet at Phoenix Market City Mall in Bangalore. The cafe, which is situated on the lower ground level of the mall, is positioned as a place that captures the essence of ‘chai warmth’ – not just in the menu, but the ambience as well.

Sushant Dash, Regional President – India and Middle East, Tata Global Beverages, said at the launch of the new outlet, “As part of our Tata Cha pilot plan, we have successfully launched five outlets in Bangalore. After our cafe at Mantri mall, we are now excited to bring Tata Cha to another popular mall in the city, where there are people from all across the country, every day. We aim to provide our customers with refreshing beverages and delicious menu to help them relax and recharge during their shopping spree and leisure time at the mall.”

The menu is a mix of old favourites and innovative new additions. According to the company statements, many of the offerings from the beverage and food menu are about reviving lost Indian recipes that evoke nostalgia in the minds of customers.