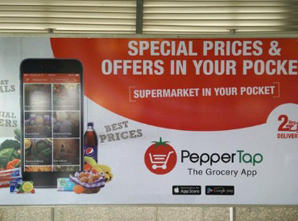 With this, the start-up closes its Series-B round at $40 million; it had recently secured  $36 million (Rs 239crore) in this round from Snapdeal, Sequoia India, SAIF Partners, Ru-Net, Beenext and JAFCO Asia. The company has so far raised $51.2 million (Rs 340 crore).

PepperTap, run by Gurgaon-based Nuvo Logistics, also said it had acquired Bengaluru-based hyperlocal grocery delivery start-up Jiffstore for an undisclosed amount. Jiffstore's employees will join PepperTap offices in Gurgaon and Bengaluru. Jiffstore, founded in June 2014, was picked up for Times Internet's TLabs and received an undisclosed amount in funding from Unitus Seed Fund.

"We have grown from 27 orders a day in January to 20,000 orders daily by October. About 55 per cent are repeat buyers. However, we think it is better to add more depth than expand breadth... Our target is to get to 80,000-90,000 orders daily by the end of next year,â€ said Navneet Singh, founder and chief executive.

"Jiffstore's team of 40 people will join PepperTap's Gurgaon and Bengaluru offices. PepperTap aims to use synergies with Jiffstore to enhance customer experience,â€ Navneet Singh, founder and chief executive, told reporters. Singh said the company was focusing on strengthening its presence in the cities of operation.

PepperTap has launched a vendor app, one for organised retail chains and another for standalone vendors, which will go live on Google Play Store soon. It has also formed marketing tie-ups with other start-ups to attract users.

Founded in November last year by Navneet Singh and Milind Sharma, PepperTap is a mobile-first hyperlocal grocery delivery service that provides on-demand grocery products to consumers. It claims to deliver within two hours of receiving an order in 15 cities.

In September, it had raised $36 million (Rs 238.72 crore) in Series B funding from online marketplace Snapdeal and other investors.

PepperTap competes with other grocery marketplaces such as Grofers and ZopNow. Inventory-led firms such as BigBasket, LocalBanya and EkStop, a Mumbai-based e-grocery which was acquired by Godrej Nature's Basket, can also be counted as PepperTap's competition.