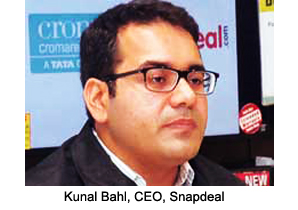 What does the fresh investment mean for Snapdeal?

I think this is a big endorsement of the focused strategy we have had since the beginning. I have been clear that I want to build the best marketplace in India. This is a testimony to two things. One, how being focused creates good result and how you don't have to do everything to be successful. Second, a testimony to the purpose of our company, which is to create life-changing experiences for smaller businesses. It is that focus and purpose that culminated into this investment from SoftBank, which I consider the Number One global internet investor.

How long have you been in discussion with SoftBank and what is the total investment, apart from SoftBank?

We have been in talks for about three weeks. In addition to SoftBank, there are a number of internal investors that have put in a good amount â€” this calendar year, we have raised close to $1 billion. We have spent only about $100 million so far and eight times that money is in the bank.

What is the stake of the founders (Kunal Bahl and Rohit Bansal) after the latest round of funding?

It is still significant, not something I worry too much about. I have a 25-year horizon for this business and as long as Rohit and I continue to be the best people for the job, we would love to run the business for the next 25 years. So, I don't worry about the stake because after a point in time, it's just a number. It's not like we are ever going to sell our stake in this company...That's just an anchor point. I don't see it as a proxy for financial outcomes and so, our view is we have a long-term roadmap. Investors and shareholders will come and go but we will be here for a long, long time.

Is the founders' stake still in double digits?

Yes but even if we had (only) one per cent stake and we build a $100-bn company, it's more than enough.

What is the valuation of Snapdeal now?

We are not disclosing that but to put a perspective, it is at a premium to the earlier round of funding. On valuation, I want to make sure all our investors make money. We try not to push the envelope harder than required. I assure all the investors that they will make money on this and I feel that is very important to do. If your valuation is too high, too quickly, it can sometimes set you up for not getting success.

What has been the total funding in Snapdeal so far?

Most of the money we have raised as a company has come this year. Prior to that, we raised about $150 mn together, excluding what we have raised this year. Till today, we have spent $100 mn because we did not have much money before.

Any plans of an IPO (initial public offer) now?

We are very focused on investing in technology and in the brand. IPO is a decision the board has to take in due course. Right now, there is no pressure from there to go public. In due course, we will make an assessment on why we should go public. Our shareholders' base is extremely balanced and long-term, and no one is in a hurry to make an exit.

How have things shaped after Ratan Tata invested in your company?

It becomes easier to work with the Tata Group companies and enhances mutual trust. More than that, it is a sublime encouragement for our team, which is made of a couple of thousands of 24-year-olds. It's a boost of confidence for them.

How did you get Ratan Tata as an investor?

My sense is he liked the purpose of our business and the growth trajectory. I think he liked how we are changing the lives of small businesses (which sell their products on Snapdeal).

Has the board composition of Snapdeal changed after the latest round of funding?

Yes, Nikesh Arora (vice-chairman of SoftBank and former senior vice-president of Google) has joined the board, as part of the investment, a very significant development. Akhil Gupta (vice-chairman of Bharti Enterprises), Rohit and I are among the others on the board.

How do you look at competition from rivals such as Flipkart and Amazon?

In a larger scheme of things, e-commerce is still small. I see our business not as a percentage of retail but a percentage of consumption. Consumption in India is estimated at $1 trillion and 70 per cent of the gross domestic product is consumption-oriented. E-commerce is 0.05 per cent of that and, therefore, the opportunity is phenomenal. As a result, I think no one player can create the market, though I feel only one player would, eventually, be more successful than the others, by virtue of business model, creativity and execution. Clearly we have taken capital as a necessary condition for success. There are multiple players with capital. Now, the question is how to use that money and how to bring in creativity.

But do you pay attention to competition?

Our competition is not going to give us money. Our consumers will. Since end-consumers and merchants give us money, we stay focused on them, to create a million life-changing experiences.

You have been aggressive on new and unique categories, such as home and automobiles. What's next?

There are more coming. We paused at Diwali. We would announce new categories soon. My view is if a product/service can be bought offline, there is no reason why it can't be sold online. At the end, a service might be consumed offline but it can be purchased online.

What is Snapdeal's staff strength and what is your expansion plan?
Our key focus is to increase the engineer strength. We have about 500 engineers and are looking to hire 500 more in Bangalore in the next six months for the new innovation centre and another 1,000 engineers across the country. Excluding call centres, total employee strength is 1,500. We want to create a great technology company and are hiring globally as well, bringing a lot of talent back into the country. The head of engineering, for example, spent 13 years in the Silicon Valley and has moved back to us. The only capital expenditure in our business is laptops and I don't want to change that. We don't have mega office plans, as it is only a cost.

You did not tell us who your competition isâ€”Flipkart, Amazon or perhaps Alibaba?

Anyone who is taking a share of consumers' pocket and is not on our site is potential competition but I don't lose too much sleep over that...I lose sleep over who are we not talking to and who can benefit from our platform.
Tags : Snapdeal Softbank Kunal Bahl Rohit Bansal Nikesh Arora
Advertisement